In March 2017 Ipswich Disabled Advice Bureau was one of 4,500 organisations invited to take part in UK Parliament Week 2017. We focussed on events for our clients rather than public events with the aim of trying to get more to engage in democratic process, as we were aware that many to do vote in elections.

During the week we invited each of the clients who came to our office, or outreaches, to ask Parliament a written question on some UK Parliament Week headed paper – nearly half responded and we are currently trying to these answered. 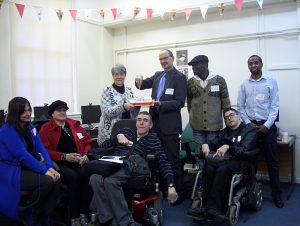 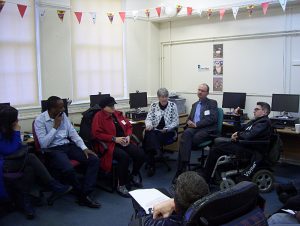 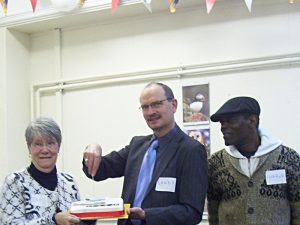 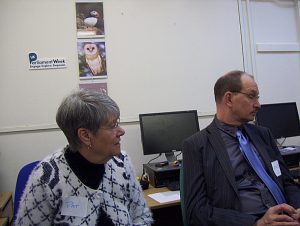 In addition, we organised a forum for our clients to come and take about their issues and views in respect of Disability and Employment. The discussion, which lasted two and a half hours, was recorded – both audio and video recordings were made. It began informally with the attendees talking amongst themselves, the next two hours were more formally structured and attended by our local MP, Sandy Martin.

The discussion was very lively with all participants talking about their experiences and ambitions, raising issues and, generally, contributing a lot of information. The discussion began with their schooling, then we found out that everyone present had gained qualifications since leaving school, most at Level 2, three at Level 6 (undergraduate) and one at Level 7 (postgraduate). Most had been employed and spoke about the work that they had done including, in a range of manufacturing companies, teaching, construction, engineering, retail, ancillary work in hospitals, clerical work, service in the RAF, as a civil servant, surveying for Anglian Water and serving refreshments on trains.

The forum also discussed barriers to returning back to work – changes in the work place with the loss of manufacturing in Ipswich and how the industries that had ‘replaced them’ need workers to have different abilities such as fast information processing; work programmes that do not look at options such as home working, that is safe and not an online con, as an option for getting back to work; the main focus being on reasonable adjustments for physical disabilities but not mental health issues, how machines and robots have taken over jobs previously done by people who now have to watch the machines and robots and the lack of job satisfaction that brings. Distances that now have to be travelled because much available employment is on retail and business parks on the edge of urban areas or even further out – and how this adds considerably to the length of the working day.

At the end of his time at the event Sandy Martin MP, explained to the forum how being a member of a Parliamentary Party assists in getting his constituents’ concerns raised in Parliament and used to influence policy making. The participants have asked for a second forum to be held, which is planned for late January/ early February 2018. 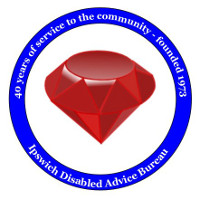